Here are the iconic Isle of Lewis chess pieces on a fine Santos Palisander chessboard from Spain.

The skilled craftsmen at Berkeley Chess have interpreted the Isle of Lewis chessmen on capturing the majesty of the original sculptures. Paired with this amazing chess board it's a fine chess set anchored in history.

Originally crafted from walrus ivory and whales teeth the iconic Isle of Lewis chess pieces were discovered in the vicinity of Uig on the Isle of Lewis some time before 11 April 1831. The precise location seems to have been a sand dune where they may have been placed in a small, dry stone chamber. The hoard which consisted of 78 chess pieces and 15 other artifacts was initially shown at the Scottish Antiquaries Society in Edinburgh which hoped to acquire it but was unsuccessful in its fundraising efforts. The British Museum eventually acquired it between November 1831 and January 1832.

The pieces were probably made in Trondheim, Norway, about AD 1150-1200. At this period, the Western Isles, where the chess pieces were found, were part of the Kingdom of Norway, not Scotland. It seems likely they were buried for safe keeping on route to be traded in Ireland.

The chess pieces testify to the strong cultural and political connections between the kingdoms of the British Isles and Scandinavia in the Middle Ages, and to the growing popularity within Europe of the game of chess, the origins of which lie in India after around 500 BC. Chess arrived in Christian Europe via the Islamic world, where the game was adapted to reflect medieval European society. Of the ninety-three pieces of this hoard known to us today, eleven pieces are in Edinburgh at the National Museum of Scotland, and eighty-two are in the British Museum.

Stylish Santos Palisander and Maple veneered board features an inlay border and a matte finish that is pleasing to the eye and touch. The striped and highly visible grain of the Palisander wood is of the Dalbergia genus, the same family as Rosewood and for this reason is an especially nice pair with many rosewood sets.

Great product, you can tell there is some fine craftsmanship at work here. It is a littler bigger than I expected!

Though this is a family Christmas present, I can’t help but reopening this gift to my family and admiring the beauty and craftsmanship that was put into it. This will be a family piece that can be passed down from father to son for generations. I am elated about my purchase and look forward to teaching my children how to play on Christmas morning. Thank you again! 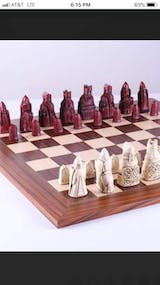