safe and on time

gifts for your loved ones

Timeless yet economical, well made chess set with storage.

With great definition and lacquered finish, yet no fragile parts, it's ideal for all ages and is one of the smoothest playing sets and all time favorites.

19" square board with full 3 3/4" tall king and extra queens for pawn promotions. 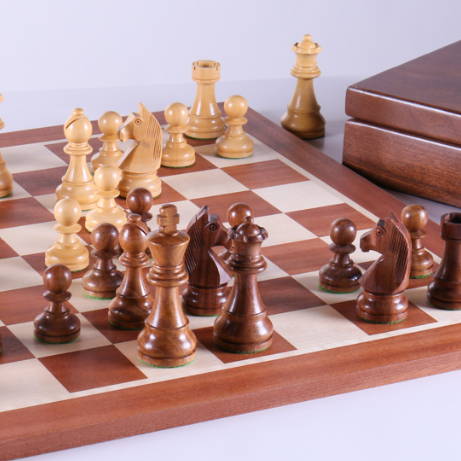 starting out or returning

economical set that gets played

One of the most economical ways to get a robust, large, worry-free chess set. Play any kind of chess and not worry about parts breaking. If you ever need a replacement to a lost piece, Chess House makes it easy. 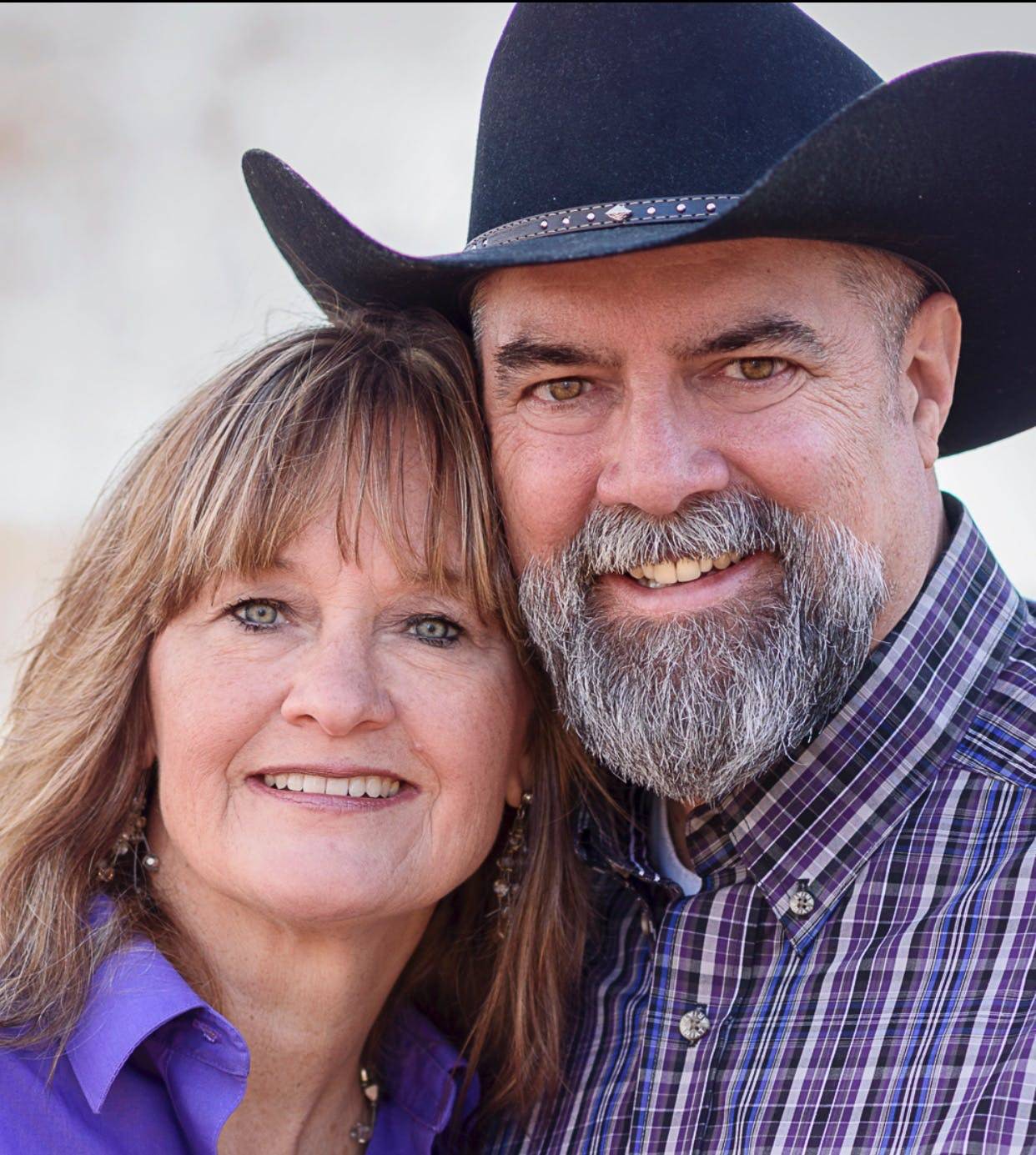 My wife and I are enjoying re-learning a game we loved as children . This is the perfect chess set for us to use together and to teach the game we love to our grandchildren. Best feature - you don’t need to plug it in and it doesn’t require batteries.

Here's a small wood chess set with beautiful little pieces that are easy to move. Best of all they cling to the board with strong magnets.

The finest American-made chess boards with pieces to suite your style.

Have you received a set of chess pieces from a family member? The memories that go with it are the stories you can tell to your children.

If the chess set was crafted by the family member - it's extra special. Keep it in the family so and preserve the stories that go with it.

If you have been gifted a treasured set of chessmen and need a chess board, send a photo, and we'll help you select one. 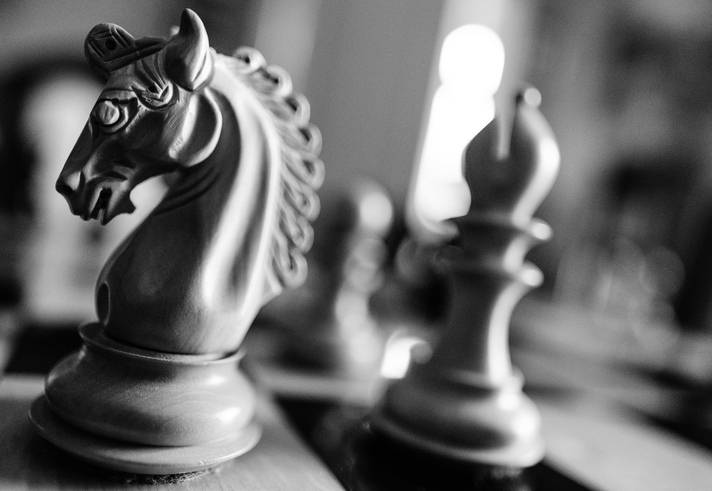 Beautiful website, easy to use, there is an obvious devotion to the game of chess and to quality boards and game pieces.

Trustworthy, good products, Chess House will be there when you lose those game pieces.

your child takes this to class

Here's the set kids play at home and like to take to class. Plus it's the recognized chess federation standard, guaranteeing young players start out well.

With easy bag storage options available separately, the set is ultra portable and all the pieces stay together for use any time. If pieces are ever lost, replace at Chess House with ease.

Very few of these original sets are still available for purchase and when they are, they command prices at auctions of tens to hundreds of thousands of dollars. Man Ray is hailed as one of 20th century's most innovative artists. Son of a Russian immigrant tailor, Man Ray's artwork was far ahead of its time so he lived modestly his whole life. His vision was to design a simple straightforward, but modern and affordable chess set.

The knight piece is a violin scroll and is in fact carved by a violin maker in Italy.

Man Ray's original design was the first modern set comprised of all abstract geometric forms. The sets found here are copied perfectly by expert craftsmen from both Germany and Italy. These pieces, that will reintroduce you to the game of chess, each have a special association.

Nicely finished, polished chessmen play smoothly on the wooden board. No hassle piece replacements from Chess House for the life of your set.

It's one of the best-value, well-made chess sets, perfect for personal chess study or play. Includes two soft drawstring bags for storage. See board color and storage options available.

play chess against a computer

Choose your level of challenge

It's the latest model of electronic chess. Press the squares to make a move and play the computer's move shown.

Play and improve by challenging at different levels, taking back and experimenting, and getting hints on good moves.

the ideal chess board

for your best play

The flex pad chessboard offers even more convenience than most roll-up vinyl chess boards in that it lays flat every time and can be both rolled-up and folded. The smooth playing surface interacts well with club style or any felt based pieces. Regulation size, the board is flexible for personal, club, or school use. Pair it with any standard size club or collectable chess pieces and you are in the game fast.

Because it's a mere 1/16 inch thick, it's easy to store roll-up style in a bag with loop or an enclosed carrying case. Roll it up with the squares facing outwards for best results.

These boards stay flat when you unroll them. Much better than vinyl. More durable as well. 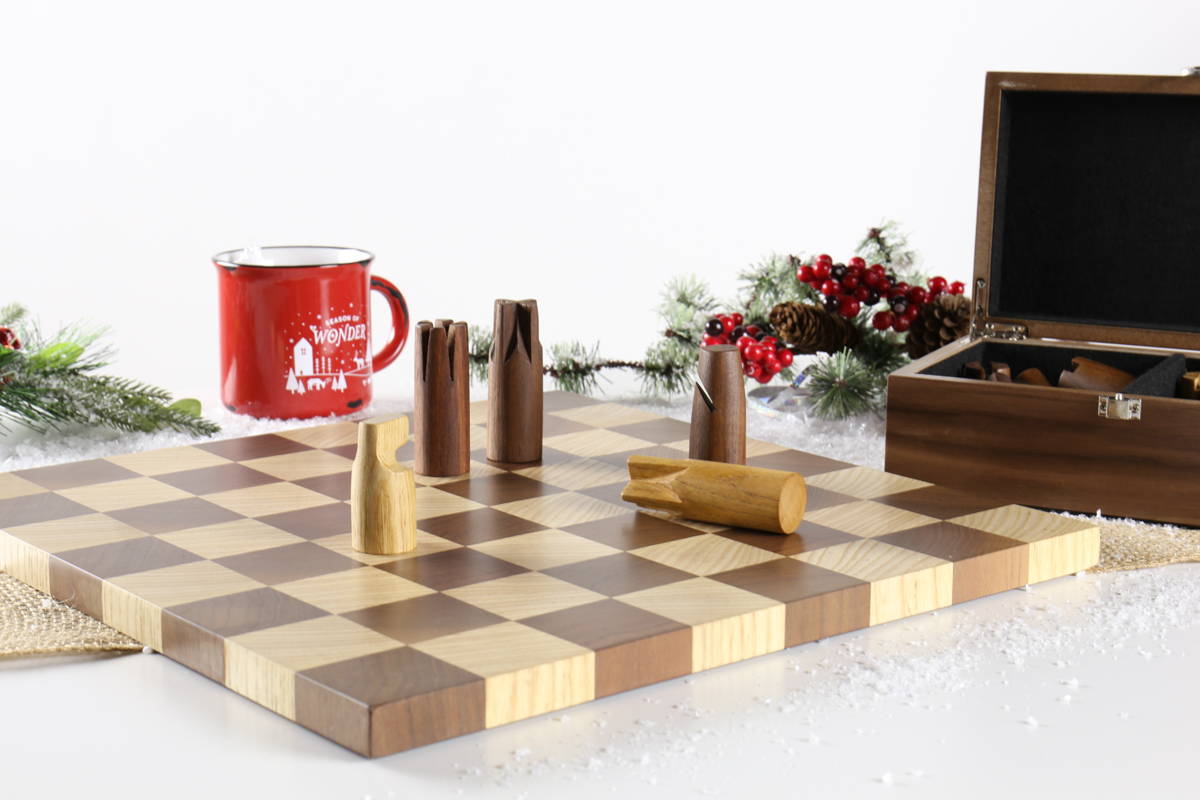 These chess sets were made in the late 1970's and were recently found and made available for sale. About 25 sets exist now and most have the original sleeve with Geppetto label on it.

Frances' father started his company Geppetto Industries around 1970 when she was a very young girl. He loved chess and had been Nevada State chess champion when he decided to make chess boards and then also the pieces.

Frances doesn't know how many chess sets were made or sold, but her father says that 200 of his best were burned up in the Oakland Hills fire of 1991 which also burned their house down.

Chess House is enabling Frances to find new homes for the remaining sets her father made. 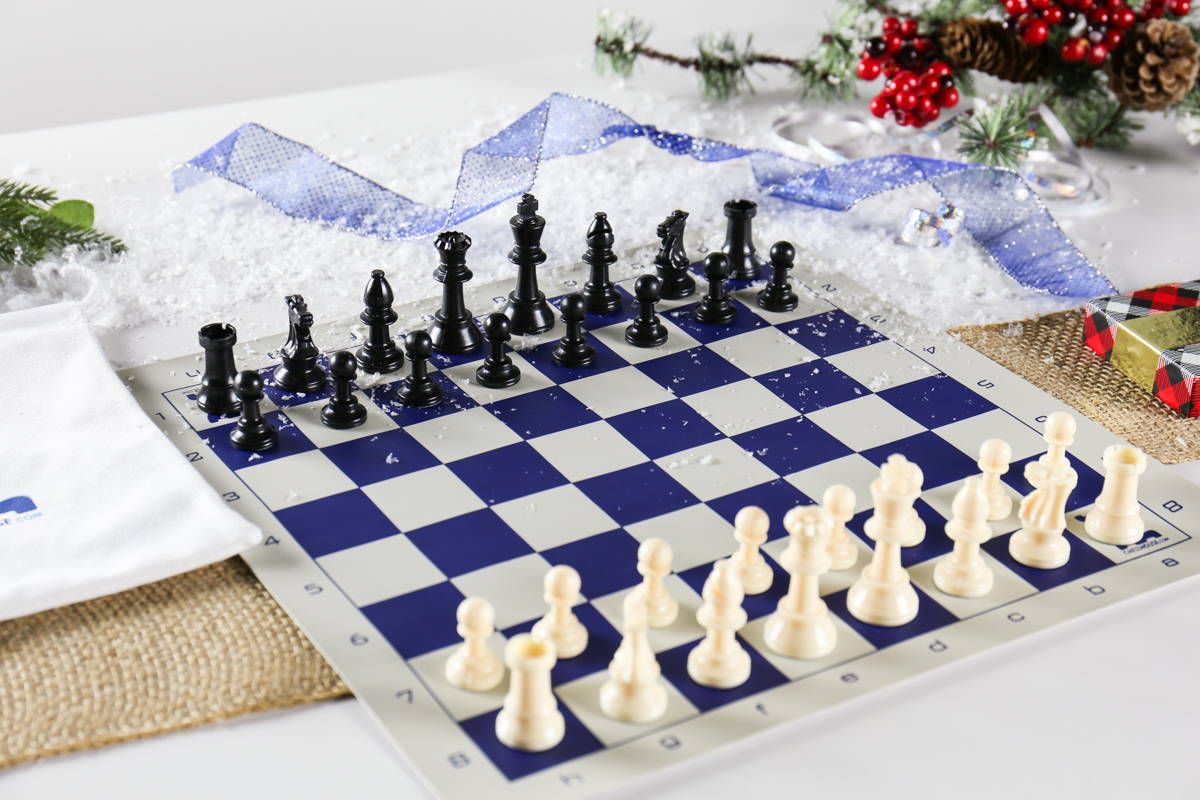 For a limited time during December 2018 holiday, we're giving away this chess set to help young players discover the exciting game of chess. The conveniently small club style chess set is perfect for playing chess at home and on the go. At 14" square it's the miniature size of the club style chess sets. With 1-8 and A-H system, youngsters can learn and practice their coordinates. A soft drawstring bag is included to keep all your pieces together.

How to order one. One per customer per home address please! No other product purchase necessary. Apply discount code E100MFR in checkout for 100% OFF this chess set. First Class Mail shipping is a few dollars anywhere in the U.S.A. Just pay this minimal shipping cost if you're ordering this chess set alone. Enjoy and share.