You are making a difference

Today, 97-year-old Bill DeGraaff stepped through my office door, accompanied by his daughter Hilda. His love for chess dates back to his early years in Holland.

Let me share with you how this man made a life-changing difference.

His visits are rare and unannounced these days. Like today. I drop everything and welcome him.

Though he walks on his own and his mind is quite clear, Bill is now fragile. Each visit it's evident that he misses his wife more than anything.

Although it takes significant coordination and effort he has come unexpectedly again today to say hello and see what's new - as he did in the early days of Chess House.

I welcome him again into the office and invite Bill and Hilda to take a seat. With patience, I share the unique STACK board1 and the Millennium Exclusive2.

Bill marvels at how chess computers have changed through the years (he has owned many) and plays a few moves on the Exclusive. 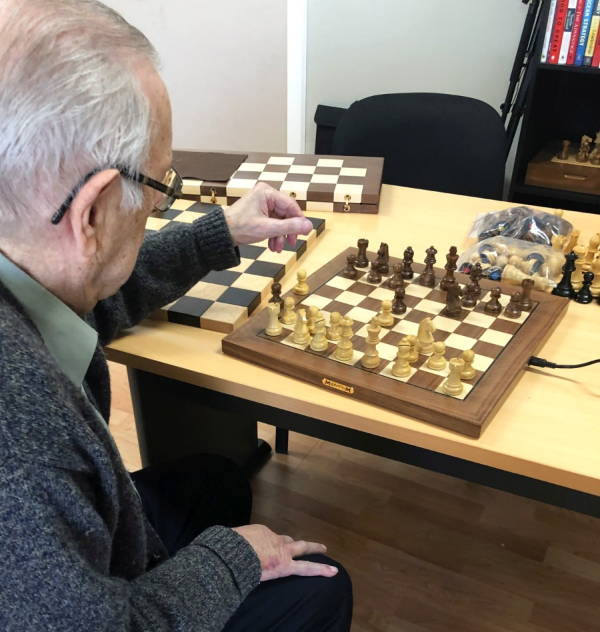 He insists that his chess playing days are behind him. But I know that chess will always give him some joy and put a smile back on his face.

With a little encouragement he makes some moves and almost allows himself to continue playing this game.

Bill asks me to help him remember what opening is in play.

I tell him that he started with the French defense.

"Oh yes! That's the one your brother Elliott reminded me that I taught him" says Bill. (Admittedly it's a favorite of mine as well.)

After a few more moves Bill became emotional. Playing chess now reminds him of past wonderful memories. He has outlived most in his family.

He's even bid chess farewell. But it still owns a bit of his heart.

Every time Bill enters the office, sometimes years between - sometimes just months, I recognize how he was present in a key part of our youth.

To Bill, he was just enjoying chess and sharing it with young players who were interested.

One generation ago that was us youngsters, my brothers and I.

Today, however when he was wrestling a bit with his memories, I reminded Bill,

"You ARE making a difference"

Bill played a significant role in our young lives encouraging chess and helping us better our game and strive to take down rivals with relentless dedication. Shown below is Bill with Ted Neff (middle) and Elliott Neff (right) 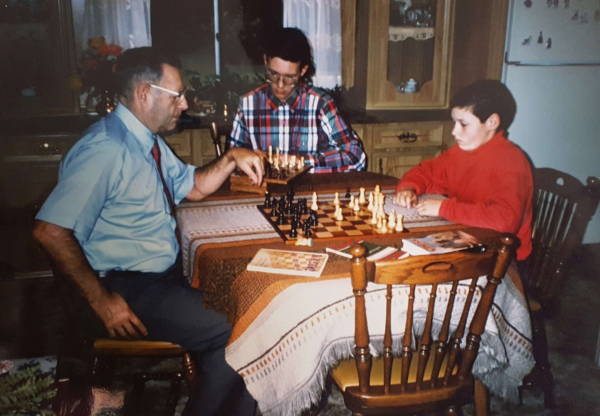 I reminded him that Chess House exists today because he was very influential in teaching the game and sharpening our skills back in those days.

As further evidence of this impact, I handed Bill a copy of my brother Elliott's book A Pawn's Journey3. 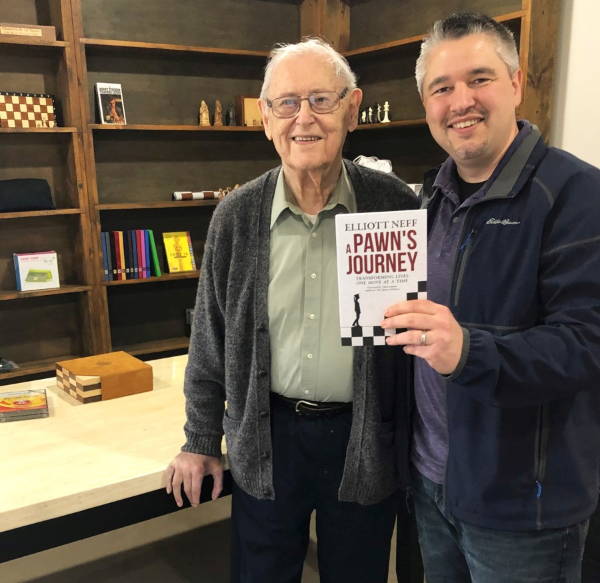 Bill's early influence on Elliott Neff helped shape Elliott's path to reaching over 10,000 kids and founding Chess4Life4 with the mission to teach life skills through chess.

To emphasize this impact, consider this. For several years Boeing is sponsoring Chess4Life's early learning initiative5 due to chart-topping results preparing kids for kindergarten.

And that's just the surface.

I'm writing this non-choreographed story just hours after these photos were taken.

It's my "living tribute" to Bill.

Before Bill left today, we talked about Elliott's recent book, A Pawn's Journey. I think it's a fitting chapter in our long friendship. This book portrays the essence of making a difference with chess. The story draws you into the main character April's high school encounters surrounding chess. It's a highly-relatable narrative based on collective real-life experience of many of Elliott's students.

Before he left, I gave Bill this cap. We all laughed and agreed it made him look quite young again. 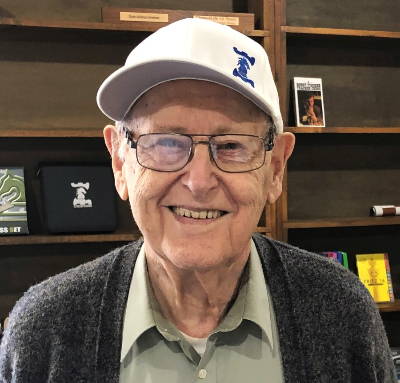 We both know that each time he stops in could be his last. But he says that's okay. God knows and all's well with his soul as a fellow man of faith.

What I've learned from Bill

Relationships matter most. Generosity pays back over time. Thankfulness is the best attitude. Long marriages are possible and worth it. Chess is one of those great ways to bring people together.. And you are making a difference today whether you realize it or not.

My personal passion with Chess House is not only designing unique products and the most exceptional shopping experience, it's helping you enjoy or make a difference with chess - wherever you are in life.

References in this article