We are confident that this first or second chess set will solidify the love of chess in anyone that is a child at heart.

Are you ready to make the leap from an entry level plastic set? At 16" square, this lovely wooden set is large enough to impress, yet small enough to take on the road.

Best of all, the pieces store inside, and the board has printed coordinates for beginners or those that like them.

I wanted something unique for my great grandson. He loves it.

D
David Russell Nield
Everything as advertised but shaky QC

I bought this set for my birthday and everything was as advertised but 2-3 of the black squares had significant discoloration (see photos attached). Returning for a refund was easy, I was sent a prepaid return label to print and send back, however they are making me pay for the return costs, which subtracts $16 from my refund. I expect that is because I'm returning the set for a refund instead of having it replaced because there are other things about the set that I didn't like (none that weren't advertised, for example, after seeing and feeling the set I realized that I really wanted larger squares and weighted pieces) and expect that I wouldn't have been charged to replace the board with a undiscolored one but it still left a bad taste in my mouth to be charged for the cost of returning a bad QC'd set for a refund. 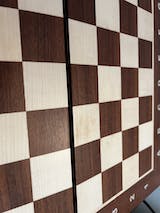 K
Kevin
Primary materials are solid, but details are lacking

The quality of the materials for the board and pieces are well done and I anticipate will last a long time. As others have mentioned, the details are a bit lacking. The clasp is quite feeble and the storage liner is made of a cheap felt-lined plastic that the pieces tend to shake around within. A foam insert might make for a more snug fit. Although I don’t think this is strictly labeled as a Staunton style set, was mildly disappointed that the bishop pieces lacked that classic "notch" in the mitre.

Pieces have a great feel and weight to them and the board is quite attractive. The only drawback is lack of a case or cover, even if a simple, durable cloth (only reason for 4 starts).

Really nice feel, would recommend this board and site