Pad and protect small or large chess sets and clocks! It's now designed to comfortable fit club size OR larger 4" chess sets. Plus, the Chronos and other large and long clocks now easily fit this new Deluxe Tournament chess bag. You'll enjoy smooth zippers, and a quality feel to this inexpensive, yet truly convenient chess bag. Whatever you've got, it'll fit in there. When you're ready to play, just unzip the bag, and in a matter of seconds you have it all out and ready to play!

So next time you go to class, or next time you need to practice at home. Just pull this bag out and it's all there waiting for you. No searching for missing pieces when you have such a clever, all-in-one chess bag.

The new shoulder strap is going to make it even easier for you to carry your chess set AND other stuff you gotta bring.

The Deluxe Chess Bag is your smartest choice for low cost rugged gaming.

I’m very satisfied with the board. Nice quality, good feel to it, and a nice selection of colors. I would recommend it along with the heavy duty chess pieces. 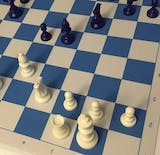 I bought this chess bag for my son who travels so much for tournaments. This bag is perfect! Fits his large weighted pieces, clock, flex pad and score sheets. Great strap to carry by hand or cross body. Love it!

This is an Update of my previous Review.

So you get your NEW Chess Board. At first you are THRILLED by it, but then that board gets subjugated to REAL WORLD USE. Your NEW BOARD you were so thrilled by starts showing it it hidden flaws: The vinyl board has a horrible smell and somehow shows mysterious marks and when you try to scrub them off the printing comes off; the silicon board starts to deform; etc.; etc; etc. I was prepared to see the same thing with the Flex Pad. I belong to a small club comprised mostly of vets ranging from WWII and Korea to Viet Nam and the Cold War -- I think or YOUNGEST member is in his very late 50's to early 60's, and two of or members are in their early to mid 90's. Our sets are all PRIVATELY held and toted to the club every Tuesday. I have Parkinson's and have learned NOT to play ANYONE unless they have and extremely heavy set other wise pieces will somehow mysteriously find their way to the floor; another member in his 90's without fail somehow manages to spill a cup of coffee, or some other liquid; and so on and so forth. To say we are tough on equipment would be an understatement. Since a recent move 2 years ago, I have stopped taking my "Ultimate Road Warrior's Kit" with me simply because it is too heavy, and usually -- but not always -- some member has brought *their* set with them -- but, then again, not always. Result: I have started carrying my Kit with me once again.

This past Tuesday I got there EARLY so set up my set -- a HoS Plastic Marshall set; a full size Chronos II Push Button clock, and the Chess House Flex Pad in "Dark Slate Grey" (someone needs to have their eyes checked for Color Blindness, as this is really a PLEASING Dark Blue-Green, NOT Grey) I played one game, then rotated over to another set. Most, if not all, of us are coffee drinkers, and so at the height of an intense game, a cup of coffee was sloshed onto my NEW Chess House Flex Pad. Prior to my Flex Pad when I was using a heavy dusty vinyl board, in a case like this you simply mopped off the board, reset the pieces, and continue with the battle. With a Mouse Pad board once the board is stained, it is stained for good -- it gives "Character" to your set; "war wounds" to show that it has witnessed many such "battles". The guys soaked up much of the coffee and used water to clean up the worst of the stains. My new Flex Pad now had its first "Battle Scars".

There are very few things that stain worse than coffee, which is one of the reasons I have always used a vinyl board. It was this situation I precisely feared would happen, but for $13?? No big loss. In real life I was a Ph.D. level Research Scientist, and now love doing strange "experiments". After sitting around for 24+ hours while I fought off a bad Migraine Attack, I finally decided to see IF I could remove the coffee stain on the Flex Pad.

I retrieved the Flex Pad from my bag and then armed myself with some Dawn dish soap -- if it is good enough to clean up baby birds covered in oil, it should be safe to use on my Flex Pad. I squirted a little Dawn on the two coffee stains, then wadded up some paper towels soaked with water and then gently scrubbed the two stains, and in about 30 seconds they totally had disappeared... at least to my eye. I scrubbed for an additional 30 just to make sure. Then the question became how to get rid of the soap? So I did what any good vacuous experimenter would do: I took the whole board into the bathroom and submerged it into running water until there was no soap coming out of the board. I then placed the board on a old towel to absorb as much water as I could them basically threw the board over a towel rack and every 2-3 hours flipped the board over to allow even drying time. RESULTS: This afternoon after the Flex Pad was fully dried I inspected the two areas that had been stained, and even under 10X magnification I can NOT see any sign of a stain! The board looks as pristine as it did when it first arrived.

Caveat Emptor: I would NOT encourage anyone to purposely spill any substance onto your Flex Pad, and I suspect things such as magic markers etc. -- anything that may *force* its way into and through the surface layer -- may never come out. I have no idea if this method will work with Red Wine, another highly staining liquid, but it is worth a try. I suspect -- no proof, but suspect -- that there is a difference between the surface of a Mouse Pad and the Flex Pad, which may explain why pieces push along the Flex Pad surface much more smoothly, as compared to the surface of the Mouse Pad. Total guess, but I posit that the surface of the Mouse Pad tends to trap liquids because it absorbs the liquid, while the surface of the of the Flex Pad traps a liquid but with something like Dawn allows the stain to be washed away. Again, just a guess.

Since under Real World Use the Flex Pad can be cleaned up even after being stained with coffee, I continue to rate the Flex Pad 5*****

Finally...a chess board that actually lays 100% flat!! 🙏🙏 The pieces don't slide super smooth, but that's to be expected considering the material of the board. It's super thin, rolls up tight and the rubber button keeps it in place nicely. Went with dark slate grey. It looks great, it's more of a deep green with a bit of grey.

Overall very happy with the purchase and glad to replace my silicone board that's still creased from being folded in the packaging.

I have only had this "Flex-Pad" briefly, but it is obviously a roll-up that eliminates the failings of other roll-up game boards. My research of reviews & opinions convinced me to buy this board. It arrived folded square, into my mailbox.... it unfolded flat! Then I rolled it up tight and let it sit for days... it rolled out flat. None of the usual storage 'memory'. I like the weight and it does not slide around a table. Personally, I do not slide pieces across a board, so I have no opinion of this for those that do. No odor was noticed.
I am confident that this is the gameboard for me to travel with. I will adjust this review if irregularities occur.

One point: The dark red board is a bit lighter than I expected, but absolutely not a problem for me.

Also, ChessHouse has proven to be an excellent online company to deal with. Their attention to their customers satisfaction, ease of use and reasonable pricing is exceptional.