The themed chess pieces consist of the big five animals of Africa and baboon busts with a dark and light base for opposing sides. The animal chess pieces are molded from high-quality Polystone (resin & stone) that offers a smooth porcelain-like finish. The chess pieces are then meticulously hand-painted with incredibly fine detail by our talented African artists using only the best oil paints.

The solid, durable wooden African chess board is finished off with a beautiful hand painted Polystone frame My 7 year granddaughter upon returning from her weekly tennis lesson remarked to her mother that wanted to learn chess. Her mother asked whom she knew that played chess. She replied, 'No One'. I decided that She needed a chess set. much, much later I chose the African animal one., knowing that she loved nature and animals. Thought her mother would have her hands full explaning the pieces and moves. But Charley is very bright and smart and could master all that.Sent her the chess set and a chess table with two chairs . she assembled the table and chairs together all by her self. and yrsterday she won a game with her mother. Charley amazes me. 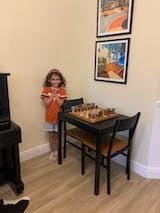