This medium size magnetic travel chess and checkers set comes with a hinged, snap-closed plastic box that closes tight to store all the chess and checker pieces for travel or storage. The well detailed magnetic chess pieces are white and black solid plastic and come with felt on the bottom. Magnets are strong enough to hold the set upside down! The checker pieces are not magnetized or felted. This set is great for students or for traveling, and also would make a nice gift or prize!

Just received the set the other day, thus haven't had a chance to use the set much yet -- just for some exercises, to work out some illustrations and problems in a chess book or two. So no reason to mark it down. I'm just about to leave for three months on my sailboat, so we'll see how durable the set turns out to be. My guess is that it'll do fine. Some initial impressions:

The size works well for me -- not quite full size, but large enough to use comfortably. It fits in my backpack; TBD if it will make the cut for a longer trip (I don't want to get a bigger backpack, but I also find those really teeny chess sets discouragingly hard to use).

The set is not elegant or fancy -- it's straight-ahead simple and functional. It's also not very expensive. A good combination for me.

The slip of paper with the chess and checkers rules of play is laughably incomprehensible. Probably not an issue -- I doubt someone approaching the games as a rank beginner (as I am) hasn't found a basic introduction to the games before ordering this set.

The degree of magnetic stickiness seems about right. The pawns and pieces stay put but aren't hard to pick up.

I improvised protective caps or sleeves out of cardboard and duct tape, to slide over the ends of the set when folded. This is more to protect the interior of my backpack from chafe from the corners than to protect the chess set (though the caps will help with that as well). I'll probably round off the corners with sandpaper when I get a chance. They're not rounded at all.

The set does not include extra queens. No big deal -- use inverted rooks or some of the checkers pieces if needed.

I put the checkers pieces in a small (approx. 2" x 4" ) zip-lock bag I had lying around rather than keep them loose, then deal with 24 small objects kicking around and trying to lose themselves in impossible places every time I open the board for a chess game. Then with a bit of blue painter's tape I taped the zip-lock bag to the storage area.

I like that the ranks and files are numbered and lettered, respectively.

Check back in 5 or 6 months, when it'll be clear how the set has stood up to some land and sea travel and casual to moderate use.

The magnetic chess pieces came with one non-magnetic pawn, but Chesshouse is shipping me a replacement (thanks!). The set would be better with extra queens, but it's pretty good for the money. 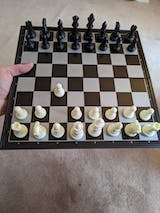 I bought 12 sets for my elementary school. Very sturdy and the pieces stay put when the board is bumped. This has allowed kids to finish games later.

Our college daughter started playing chess over the summer at the archery range. So she was thrilled to have this travel chess set arrive as a birthday present, to share with friends during their non-study times. Fits perfectly in her backpack.

I bought this thing to take out in my humvee during military training. The pieces don't move while driving and if you flip it upside down they stay in place. Any time in in the field this board is with me so we can play.