These distinct historical pieces with opposing wood accents are a treat for the decorator or chess collector.

The Zagreb chess pieces set is truly a fantastic bargain at Chess House. Pieces all look great and are nicely weighted , and hold their own in terms of quality compared to much more expensive sets. I have an old Mephisto Munich board and plan to use these pieces with that board. Since that board uses magnetic reed switches to sense piece position, I am drilling out a small indentation in the bottom of each piece, in order to insert a neodymium magnet. It takes a little time and patience to drill out a little metal from the center of each base, but I don’t have to remove too much depth, so I’m ending up with a fantastic set of replacement pieces for this older wooden chessboard. I am extremely happy with this set and would highly recommend it. 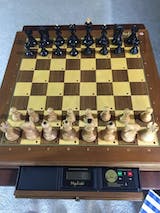 These pieces are beautiful. Such a great addition to my shop. The best priced Zagreb set I could find is right here at chess house. The packaging was done right. I'm so happy with this purchase.... I can't wait to play customers and friends. Me being of Croatian descent I had to get this lol. So glad I did!(: Thanks chess house. 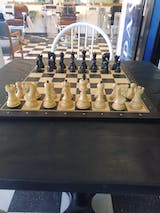 These pieces are a perfect size and weight for a larger board. They look, and feel much nicer than the 99.00 price paid. They are sturdy well built, feel good and make for am impressive board display. Did I say a good value as Well!
First time purchase from Chess House. Very quick delivery and well packaged. You will this set!

Beautiful and pleasant to hold. I especially like the design and feel of the knight, and while I wasn't so sure about the Soviet-style alternating hats idea, it's actually really pleasant when scanning the board during a game - the bishops and queen really jump out at you. My set came with extra queens as well.

The only complaints are that a) I really wish that the king had the more traditionally soviet spire or spike instead of the cross, b) for whatever reason the cross ornament of the black king is several shades lighter than the ornaments of the bishops and queen, and c) I wish the rook were 2x or even 3x heavier, just as a personal/philosophical matter (it's too powerful to feel more like a pawn than a knight, heft-wise).

I'm was so happy when I opened the box and saw this set and the board. I'm very pleased with my purchase.